If you own a hobby farm, ranch or huge tract of hunting land somewhere, you need an off-road utility vehicle. Whether it’s hauling hay to the horses, checking fences or getting to your favorite fishing hole, these compact, go-anywhere four-wheel drive vehicles are a must-have tool for any property owner. And if you want a UTV that will let you tread lightly on your land, take a look at the battery-powered Polaris Ranger XP Kinetic.

The Polaris Ranger XP Kinetic is more than the current Ranger XP with a battery and electric motor replacing the gas engine and fuel tank. It has been reengineered specifically for electrification. “We didn’t just want to hop on the electric bandwagon,” says Chris Hurd, director of product planning for Polaris, “We wanted to produce the best Ranger we’ve ever built.”

The first thing you’ll notice when looking at the Ranger XP Kinetic is the lack of a grill. Because there’s no need for a radiator, designers restyled the front end to be a little cleaner and a lot more contemporary. There’s still a big bash plate up front, and the XP Kinetic comes with a winch as standard equipment. One of the other nice features on the front is accenting LED illumination that runs between the headlights and doubles as a state-of-charge indicator. When the UTV is plugged in, the light bar progressively fills as it charges.

The back features a tilting cargo box, measuring 3 feet x 4.5 feet and with a depth of 12.5 inches, that can hold up to 1,250 pounds of mulch, gravel or gear. The fully independent double A-arm suspension is a retuned version of that found on the gas-powered Ranger XP, with adjustments made to handle the extra 355 pounds and lower center of gravity resulting from the electric power-train configuration.

The Ranger XP Kinetic features two trim levels, Premium and Ultimate, the key difference being a larger battery in the latter (14.9 kWh versus 29.8 kWh). Regardless of which you choose, the permanent magnet AC electric motor delivers 110 hp and 140 ft lbs of torque, which Polaris claims is twice the grunt of any gas-powered utility on the market. That output allows for a towing capacity of up to 2,500 pounds with the two-inch hitch receiver. 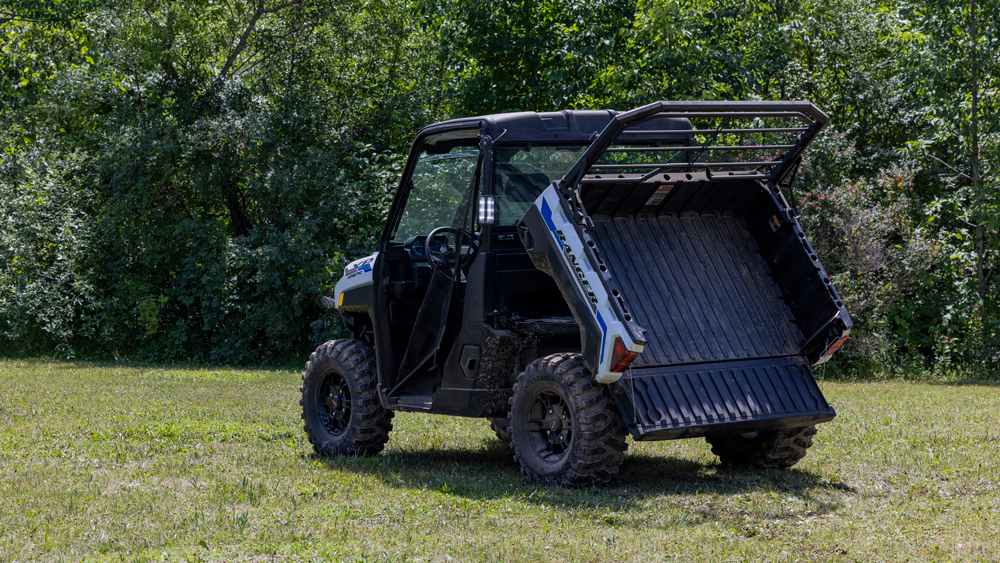 Range on the Ultimate specification is estimated at 80 miles, which will vary depending on temperature and use. Accessories are powered by a separate 12 volt battery so there’s no loss of range when it’s sitting idle. In addition, there’s a pre-wired 110 volt, 15 amp outlet in the box to allow you to run equipment, a radio or other accessories in the field.

Behind the wheel is where the electric Ranger really differentiates itself from the rest of the Polaris lineup, which includes the General and RZR variants. Throw the long shift lever into high, stab the throttle and prepare to take off like a rocket. There’s a low-range gear, but in our test it wasn’t needed, even up the steepest hill we faced. We were able to crawl up at low speed, stop halfway and start again with excellent traction. Thanks to the lower center of gravity, the XP Kinetic corners confidently. We kept it in four-wheel drive for most of our run through fields, over rocks and on tight trails in the woods. Thanks to the 14-inch ground clearance, there was never a concern about bottoming out. Also of little concern are the elements, as the Ultimate trim includes weather-treated seats and the whole interior is water resistant—including the electronic panels—so you can just hose it out after a day in the dirt. 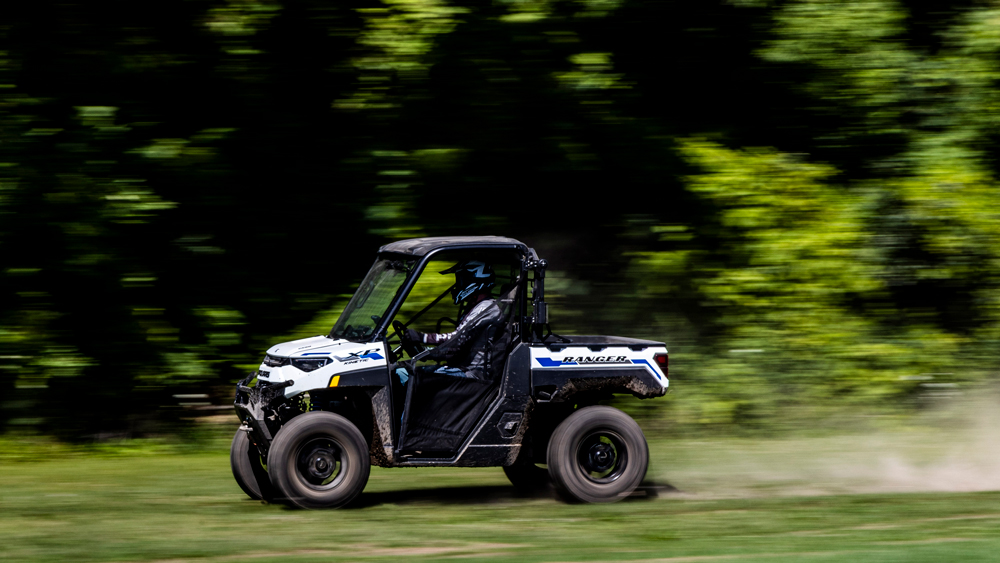 Throw the long shift lever into high, stab the throttle and the Ranger XP Kinetic takes off like a rocket ship.

Yet the best part about the Ranger XP Kinetic isn’t the performance, it’s the silence. Being able to glide quietly between the trees, hear the birds and know that the vehicle isn’t pumping carbon into the air—all of that makes the experience even better. It’s something land-owners will really appreciate since they won’t have to worry about a noisy gas engine startling their horses or bothering their neighbors. You can also run it in your barn without having to worry about the exhaust fumes. 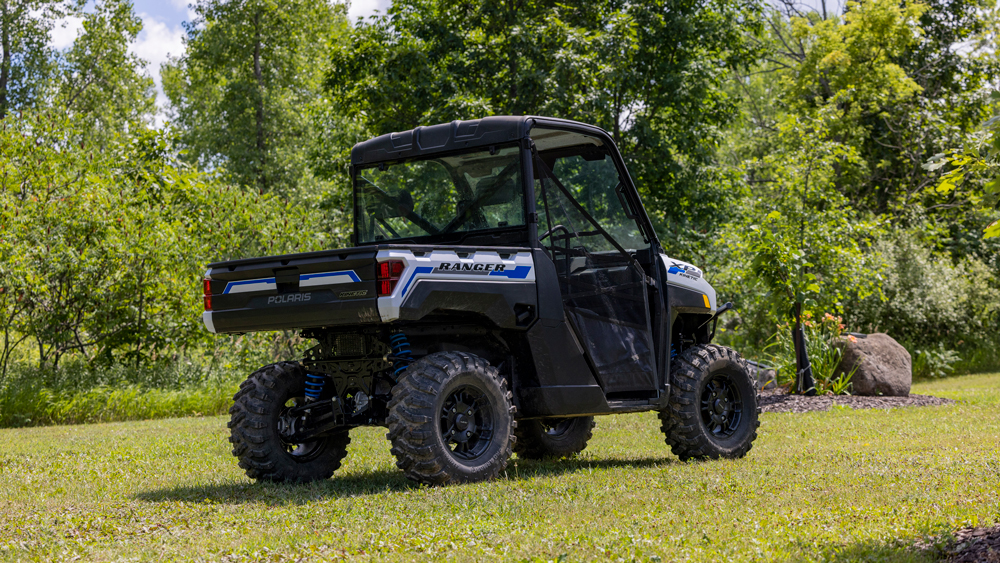 The suspension has been retuned to handle the extra 355 pounds and lower center of gravity resulting from the electric power train.

There’s a big technology upgrade on the Ranger XP Kinetic Ultimate as well. Polaris has developed a connected system called Ride Command Plus that enables you to sync data to your phone with an app in order to locate your Ranger, know how much charge it has, check on the vehicle health and share your rides with other users or friends on social media.

Polaris also has a partnership with the charging company Qmerit to help owners add a J1772 level-2 home charger which can refill the battery in three to five hours, depending on the model package. Available now, the 2023 Polaris Ranger XP Kinetic starts at $24,999 and $29,999 for the Premium and Ultimate versions, respectively.

Click here to see all the photos of the 2023 Polaris Ranger XP Kinetic. 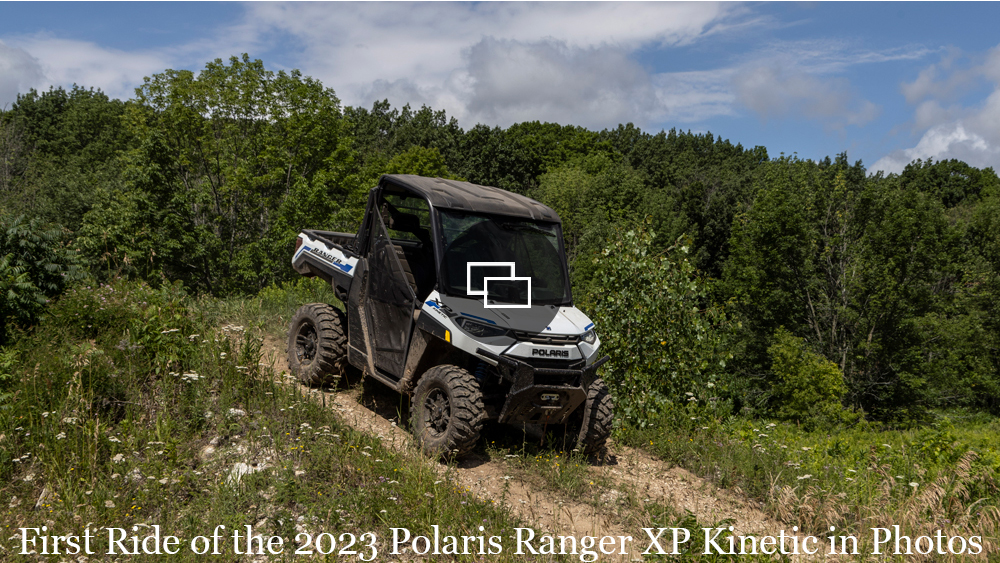 Boat of the Week: This New 235-Foot Superyacht Has Fold-Down Terraces to Create a…

The 1,049 HP Mercedes-AMG One Hypercar Could Tackle the Nürburgring Document