The most popular Range Rover in the America just got a makeover.

The third generation in the Sport series arrived on Tuesday, and at first blush, it looks to be the taut, muscular and modern SUV that Range Rover loyalists would expect. The model’s sleek body, which has been refined for this edition, is matched by performance specs that should get even seasoned Range Rover drivers excited.

For 2023, the Sport is being offered in four trim levels: a mild-hybrid SE and SE Dynamic, a plug-in hybrid Autobiography, and the gas-powered First Edition. The V-8 twin-turbo engine in that last one will get you a whopping 523 hp and allow acceleration from zero to 60 in just 4.3 seconds. But the other models aren’t too shabby either. The two SEs provide either 355 or 395 horses, according to Car and Driver, while the Autobiography can produce 434 hp. Additionally, the plug-in hybrid is able to go from zero to 60 in 5.5 seconds and has an estimated range of 48 miles. All of the 2023 editions offers rear-axle steering that can turn the back wheels up to 7.3 degrees, as well as adaptive off-road cruise control, both of which should serve to make the SUV easier to maneuver.

The rear features a sculpted tailgate.

Outside, the legendary silhouette remains, of course. The minimalist grille anchors the front fascia, with clean lines that flow back to a sculpted tailgate. The exterior differs from that of its predecessors in some pretty major ways, though. The overhangs are shorter in front and longer in back, and both the headlights and grille openings are slimmer. While 21-inch rims are standard, the Sport can come with larger, 23-inch versions. All in all, the SUV has a slightly more elegant appearance, helped along by added features such as flush-mounted door handles, Satin Grey wheels, and Satin Burnished Copper finishes. 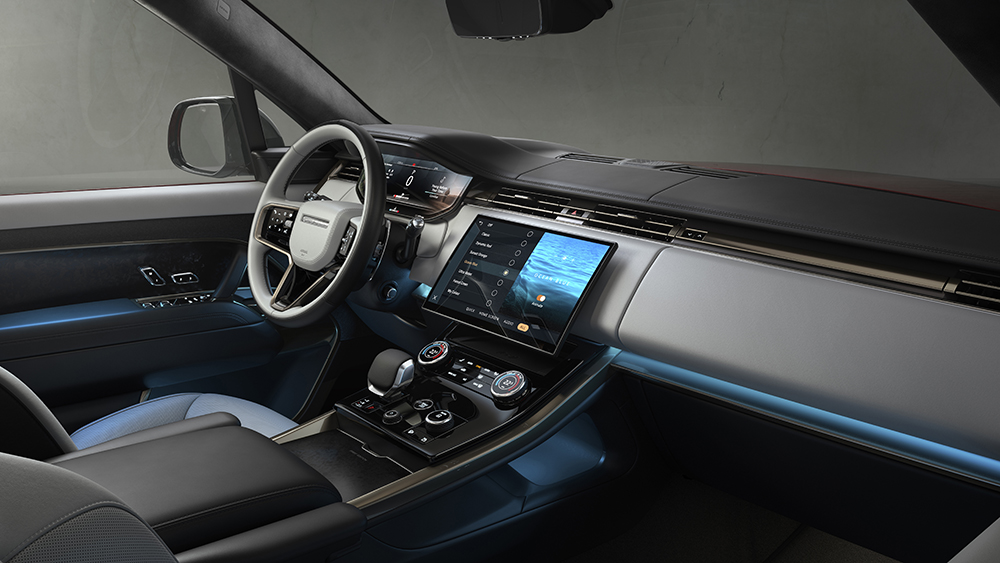 The cabin has a 13-inch touchscreen to control infotainment options.

Inside, meanwhile, the cabin has a cockpit-like feel, allowing for a driving perch that’s both dynamic and plush (especially when you factor in the heated and massaging front seats). The Sport’s platform is now 35 percent stiffer and its wheelbase was extended by three inches, providing about an inch of extra legroom in the rear seats. Lightweight Ultrafabrics can be swapped for Windsor or soft semi-aniline leather options, all of which pair nicely with the Moonlight Chrome finishes. And the technology is no slouch, either: The Meridian sound system is the most advanced in any Range Rover Sport; active noise cancellation allows you to focus on what you most want to hear; and a 13-inch touchscreen on the dash provides control at the tip of a finger.

“The exceptional new Range Rover Sport sets new standards as the ultimate sporting luxury SUV,” Thierry Bolloré, the CEO of Jaguar Land Rover, said in a statement. “It is the latest embodiment of our vision to create the world’s most desirable modern luxury vehicles, effortlessly blending new levels of sustainability with the signature qualities that have made Range Rover Sport so popular.”

If all of this gets your gears turning, the third-gen Range Rover Sport is available to order now, starting at $83,000. An all-electric version will become available in 2024.

Your Failproof Guide to Styling a Tank Top This Summer

Boat of the Week: This Historic, 90-Year-Old Sailing Yacht Was Once a Floating…