Just before John Mulaney was inducted into the five-timers club, Al Roker also popped into a party-themed sketch where he popped a bottle of champagne.

The Saturday Night Live Five-Timer’s Club is an honor held by few, but John Mulaney had quite the all-star lineup to usher him into the elite group when SNL returned on Sunday, Feb. 27. In the sketch everyone from Steve Martin to Paul Rudd to Al Roker made an appearance for John’s big moment, proving the SNL family still runs deep.

The sketch started with a couple of guys getting up in arms about a new variant — turning onto John Mulaney’s newscast, who dubbed the new “Gelvini” strain “a miracle” that’s mutated to be “good.” Apparently, the new “strain” makes you feel “good” and “not sick,” per the sketch. Paul Rudd then busted into the room and said he tested positive — and was actually feeling sick (not really).

“I’m going on vacay! See you in Bali, b—–!” John’s newscaster said on-screen as Paul and the trio of dudes started to party in a tiny NYC apartment. As if the Ant-Man star didn’t bring enough star power, iconic weatherman Al Roker crashed the soirée with a massive sub sandwich. “Did someone say hungry? Come again!” 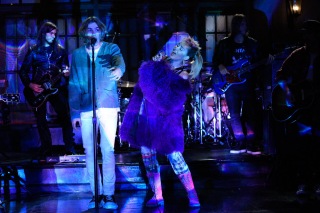 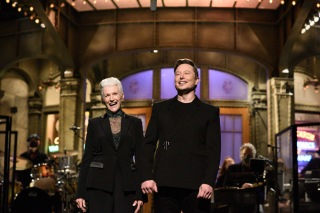 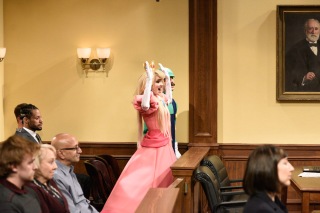 Al was definitely down for the mood, pouring some scotch and proceeding to chug it before popping a bottle of champagne! The NBC host threw on a pair of “GOOD” glasses as he grooved along to some tunes. Throughout the sketch, Mulaney continued to narrate various symptoms — a bizarre one being “long, luscious locks.” Paul miraculously had long brunette hair, while Al seemed pretty thrilled with his new ‘do.

As the sketch wrapped, Paul stayed on stage alongside fellow five-timers Steve Martin and Candice Bergen all in their matching velvet robes! The crew was on hand to help induct John into the coveted five-timers club, which means one has hosted the show a milestone five times. “Alright, everybody…how do we think this show is going so far?” Steve asked the two.

“Not to be a b—-, but my show was supposed to be a lot better until the whole cast called out sick,” Paul retorted, referencing his scaled-back December episode amid the Omicron variant. “So what, I have COVID right now — I got it from the Queen! Humble brag,” Steve laughed.

John then entered nervously with a card that read “5,” asking, “Hi, I think I’m supposed to be in here?” Steve appeared a bit confused: “Oh, Megan Mullally Hi!” Candice then welcomed him to the “five timers club” (an actual club) but was also thrown off. “Let me be the first person to say — who are you?”

Tina Fey also joined the on-stage party. “I love us writers control everything with stage direction!” she hilariously said, sipping a “five-timers fizz” cocktail made with various celebrity alcohols.

John seemed taken aback by the A-List treatment in the club, noting that when he worked at the show, he was “just a writer.” Tina reminded him, however, he did come up with “that Bill Hader character” and about “800 other things that aged terribly.” The cameos didn’t stop, as Elliot Gould popped in seated to remind Paul he was in fact, “Sexiest Man Alive” by Chest Hair Magazine (Paul took the title from PEOPLE in 2021).

Conan O’Brien then waltzed in, declaring he was there to “sign up for Peacock” and that it was “weird they made him do it in person.” The late night host admitted that he and John were “never supposed to be on TV” because “they’re hideous.” After John finally got his coveted robe thanks to a donation from Paul, Conan had one last thing on his list — declaring, “Live from New York, it’s Saturday night!”