Beyoncé rocked big, beautiful curls and a fiery red dress for a date night out with hubby Jay-Z, where the duo laughed and talked over dinner.

‘Crazy in Love’ never looked so put together. Beyoncé, 40, was the absolute picture of glamour in new photos from a date night out with husband Jay-Z, 52, where she rocked big, bouncing blond curls and a ribbed red sweater for an intimate dinner in LA. Laughing and talking while sitting in a secluded booth, the singer was absolutely radiant on her night out, and love was most definitely in the air in the new photos, available here.

The duo spent their night out at the new LA hotspot Mother Wolf, which serves upscale Italian fare. Beyonce’s scarlet top perfectly matched the art-deco decor of the restaurant. Enjoying glasses of what looked to be white wine, Bey and Jay seemed relaxed and happy as they got some one-on-one time in while enjoying a new eatery. Jay-Z, who rocked a laid-back uniform of a Yankee’s hat and white tee, seemed endeared as he shared a drink with his wife, laughing and chatting together in between sips.

This isn’t the first time this month Hollywood’s most powerful couple has gotten into the romantic spirit. Beyonce offered fans a glimpse into her lavish Valentine’s Day celebrations on Instagram on Feb. 22. From rocking a hip-hugging pink velvet dress while stepping off a private jet to rocking a red Ivy Park set, Beyoncé’s style was on point as ever for Cupid’s holiday. 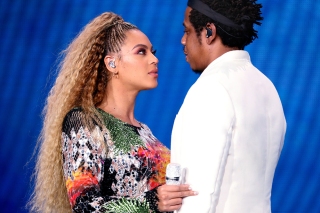 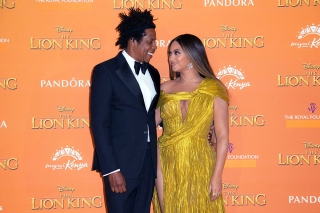 Though Jay-Z himself wasn’t featured in the post, there’s little doubt the longtime couple found a way to celebrate each other. Just the day before V-Day, in fact, the couple were seen celebrating at the Super Bowl alongside daughter Blue Ivy, 10. After Beyonce made her own appearance on the half-time show stage 9 years ago, she cheered on Dr. Dre, Snoop Dogg, Mary J. Blige, Kendrick Lamar, and Eminem in their legendary half-time show/ode to California. For the big day, Beyonce rocked short jean shorts, a black bustier and a glam crystal choker, reminding everyone you can stand out on the sidelines just as well as onstage.