Rapper Jay-Z and his daughter Blue Ivy Carter just had a blast at the happiest place on earth! The father-daughter duo were spotted at Disneyland in Anaheim, California on Thursday, also joined by Coldplay lead singer Chris Martin, his girlfriend Dakota Johnson, and his two teenage children, Apple, 17, and Moses, 15.

Blue, who aptly sported a pair of adorable Minnie Mouse ears, a colorful t-shirt, and black pants, pairing the look with black Converse high top platforms and large, gold hoop earrings. Dad Jay kept things low-key with a baseball cap, sunglasses, and black face covering, happy to explore the amusement park with his daughter and friends. Mom Beyonce and their 4-year-old twins, Rumi and Sir, did not appear to be present for the outing.

The 52-year-old rapper took his 10-year-old daughter have been spending a lot of quality time together as of late. On Jan. 17, they hung out at the Los Angeles Rams game. The pair were both dressed in black outfits, as they watched the Rams beat the Cardinals in an impressive 34 to 11 victory. 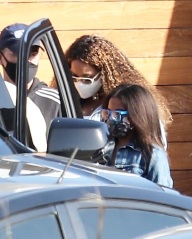 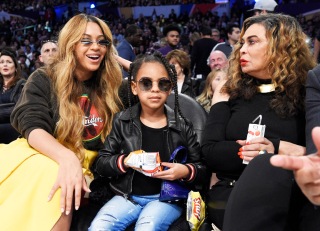 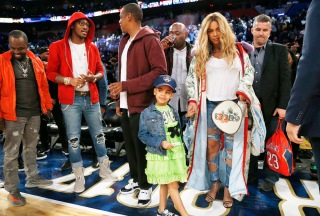 In a post shared by The Shade Room, the dad and daughter duo looked comfy and cool in the seats, as Jay sported a black bucket hat and windbreaker jacket, along with sunglasses. Blue sported black baseball cap, along with a t-shirt that had a colorful design, with a few flowers on the front. The rappers’ daughter, whose mom is none other than Beyoncé, accessorized with a large pair of glasses, plus some of her own bling with a pair of hooped earrings and a few gold chain necklaces.

In addition, the pair were again spotted at Super Bowl LVI on Sunday, Feb. 13 when the rapper brought the pre-teen, as well as a friend of hers, onto the field at SoFi Stadium in Los Angeles before the start of the game between the L.A. Rams and the Cincinnati Bengals. Both wore protective face masks and hung out on the field with others as Jay then showed Blue something interesting on his phone. Beyonce and the twins, Rumi and Sir, didn’t appear to be at the big game.