Are you ready to make your bed rock? Camila Cabello teamed up with Ed Sheeran for ‘Bam Bam,’ where she sings about bouncing back after her breakup from Shawn Mendes.

Camila Cabello bid a fond farewell to her love with Shawn Mendes, with a little help from “one of [her] favorite people and artists ever,” Ed Sheeran. With “Bam Bam” – which arrived March 4, one day after Camila’s 25th birthday – the former Fifth Harmony singer gifts her fans a track about the breakup from Shawn, but doesn’t seem to have any bad blood. “Yeah, love came around, and it knocked me down, but I’m back on my feet,” she sings in the chorus.

In the previews of the song’s music video, Camila and Ed can be seen having a drunken night out on the town – separately, it seems, as if they were each trying to forget a memory of each other. A previously-released teaser of the song already had fans thinking the track was about Shawn, as Camila sang, “You said you hated the ocean but you’re surfin’ now” / “I said I’d love you for life but I just sold our house/ We were kids at the start, I guess we’re grown-ups now/ Couldn’t ever imagine even having doubts/ But… not everything works out.”

“Bam Bam” is “absolutely about her breakup with [Shawn],” a source told HollywoodLife EXCLUSIVELY. “Camila knows that reconciliation is no longer on the table and she wrote this song as a sort of goodbye ballad to him.” She also wanted this song to “show her fans that she is okay and that she is ready to move on.”

In an interview with Apple Music, released on March 4, Camila confirmed that Shawn was the inspiration. “I think what we were trying to get across in the verse is just that things chance and things take really unexpected terms,” she explained. “And just showing that through the actual details of it. Because, for me, I f***ing love Shawn, and I feel like there is literally nothing but love for him. And this song is mostly just about like…okay, how do I make a song that shows the cycles of love and life?” 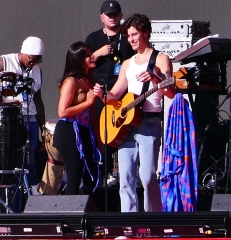 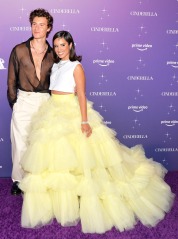 “Bam Bam” marks Camila’s first single since she and Shawn announced the end of their two-year relationship. The couple issued a statement in November 2021, telling that they “decided to end our romantic relationship” but that their love for each other was stronger than ever, and they remained committed to being “best friends” to the end. The timing of the breakup came right as Camila began rolling out the new singles for her upcoming album. “Don’t Go Yet” arrived in July 2021, with “Oh Na Na” – her collab with Myke Towers and Tainy – released in October. “Bam Bam” is her first song of 2022, and possibly the last before Familia is released.

A month after Shawn and Camila went their separate ways, he released, “It’ll Be Okay.” The song is a breakup song if there ever was one. “If you tell me you’re leaving, I’ll make it easy / It’ll be okay / If we can’t stop the bleeding / We don’t have to fix it, we don’t have to stay / I will love you either way.” Camila “was able to hear the song before it was released,” a source told HollywoodLife EXCLUSIVELY, “and she told him that it was beautiful.” The insider said that Shawn began writing the song when the relationship was falling apart and was indicative of how he didn’t “doesn’t want her to be in any pain” as they moved on with their lives.

Both Shawn and Camila are looking for a reset, in both their personal and professional lives. Shawn released his fourth album, Wonder, in December 2020, and it has yet to match any of the commercial success of his previous releases.  While the singles “Wonder” and “Monster” (with Justin Bieber) went Platinum in Shawn’s native Canada, they failed to move the needle in the U.S. market. “Monster” was a Top 10 hit on the Billboard Hot 100, and “Wonder” cracked the Top 10, but compared to the success of “Señorita” – the chart-topping, Platinum-certified hit with Camila – and it’s safe to say that Shawn’s ready to get to his winning ways.

Camila has fared slightly better. Her 2019 album, Romance, went Platinum in the U.S. (while Shawn’s Wonder has not.) The singles from the album, often released in pairs, were very hot-and-cold. “Liar” peaked at No. 52 on the Billboard Hot 100 but went Platinum. “Shameless,” while going Gold, tapped out at No. 60. The big hit from the album was “My Oh My,” her collab with DaBaby. The song, released as a single more than two years ago, hit No. 12 on the Hot 100, and has gone double-Platinum in the U.S. Since then, Camila hasn’t come close to the top of the charts. “First Man” snuck into the Hot 100. “Don’t Go Yet” hit 42,” and “Oh Na Ha” didn’t chart.

Camila and Ed previously worked together on his 2019 track, “South of the Border,” per Billboard. The song was part of Ed’s No. 6 Collaborations Project, and also featured a guest appearance by Cardi B. Sheeran, and Cabello also co-wrote the song, “The Boy,” which many suspected was going to be on her 2018 solo debut album. However, it has yet to be released.

Guess Who This Colorful Little Kid Turned Into!