Foo Fights frontman Dave Grohl just admitted that he didn’t use protective ear monitors while performing because it ‘removed’ him from the ‘natural atmosphere.’

Foo Fighters frontman Dave Grohl, 53, has seemingly rocked too hard. He confessed that he’s basically “deaf” and has been for the past 20 years. “I haven’t had them tested in a long time — I mean, I know what they’re gonna say,” he said of his ears on The Howard Stern Show. “You have hearing damage tinnitus in your left ear, more so than your right ear.”

He then confessed that his hearing is so bad that he struggles to hear people who are sitting right by him. “If you were sitting next to me right here at dinner, I wouldn’t understand a f—ing word you were saying to me, the whole f—ing time. There’s no way,” he told Stern. He had been getting by with lip reading but the emergence of masks due to the coronavirus pandemic has definitely been an obstacle.

“In a crowded restaurant, that’s worse. That’s the worst thing about this pandemic s**t, it’s like, people wearing masks,” he continued. “I’ve been reading lips for like, 20 years… I’m a rock musician. I’m f***ing deaf, I can’t hear what you’re saying.” He admitted that ear monitors could have helped him protect his hearing, but he said he refuses to use them because takes him out of the moment and the “natural atmosphere.” He has certainly proved he’s willing to sacrifice for a good performance after he broke his leg on stage and continued performing. 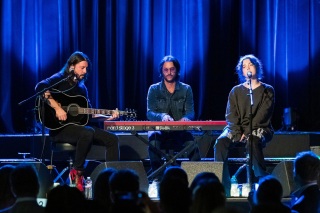 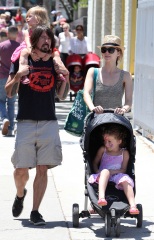 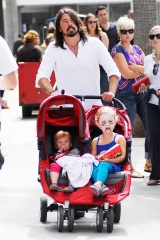 Fortunately, that hasn’t stopped the rocker from performing. In fact, they recently took the stage for the inauguration of President Joe Biden. They gave a passionate rendition of “Times Like These.” Ahead of the song, he gave a speech about how he had written the song for his mom who was a teacher like Dr. Jill Biden.

He also took the stage when the Foo Fighters was honored as the U.S. recipient of the MTV Global Icon Award. He was joined by Nate Mendel, Taylor Hawkins, Chris Shiflett, Pat Smear, and Rami Jaffee to accept the award and rock out in true Foo Fighters fashion. When he’s not performing with the Foo Fighters, he’s being a doting father to his three daughters Violet, Harper, and Ophelia. Ranging from ages seven to 15, the father of three certainly must have his hands full!