Even with a new addition on the way, right now, Willa Jonas, 1, is still her dad’s number one. In sweet new photos, Joe Jonas, 32, was seen cradling daughter Willa during an outing in Miami on Mar. 4. Joe was captured in the sweet father-daughter moments just after Us Weekly confirmed swirling rumors of his wife Sophie Turner‘s pregnancy. Sophie, 26, is currently expecting the couple’s second child together.

In the sweet new photos, Joe cradled baby Willa in one arm as he navigated the Miami airport. The star rocked a casual, comfortable look consisting of a white t-shirt, silver necklace, and embroidered “LA” cap. Willa, who faced away from the camera as she adorably held onto her dad’s t-shirt, wore a classic baby uniform of a comfy striped long sleeve and diaper. Willa’s brown hair is already beginning to fall into curly brown waves– paired with the news she’s about to become a big sister, it’s hard to believe the little Jonas has grown up so fast.

Joe and Sophie welcomed Willa in July of 2020, after a pregnancy Sophie herself never confirmed. Though it’s unclear whether Sophie will ever comment on her baby bump, she’s been far from shy about hiding it and has rocked crop tops and bikinis happily in the past few weeks. 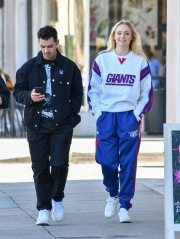 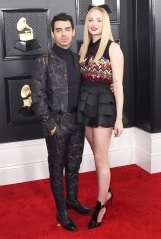 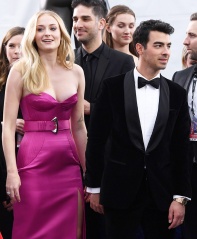 Though the duo is busy with Willa and now a new baby on the way, Sophie and Joe still managed to find time to have date nights to themselves. They shared a sweet date night out at Super Bowl LVI on Feb. 13, where Sophie even rocked a t-shirt bearing Eminem‘s face to get in the spirit for his iconic halftime show performance. And days later, they were a vision in green, twinning on a romantic lunch date in LA.

No matter what, their new addition is sure to have some close cousins: just two months ago, Joe’s brother Nick Jonas and his wife Priyanka Chopra welcomed their first child by surrogate. Nick announced the news via Instagram, sharing “we are overjoyed.” Joe’s older brother Kevin Jonas is also a father, and shares daughters Alena and Valentina with longtime wife Danielle.