Kim Kardashian, is that you? Chaney Jones once again emulated the reality star on a fun night out with Kanye West!

Kanye West , 44, has been joined at the hip with new muse Chaney Jones, 24, in recent weeks! The two were out and about once again for a late night out in Miami, FL on Feb. 24 where the model once again channeled Ye’s ex  Kim Kardashian, 41. Chaney opted for a pair of ultra futuristic sunglasses over her face (yes, at night) with a neon colored sheen just like ones the SKIMS founder has been wearing in recent weeks in the images here.

Kanye had his arm around Chaney as they left members-only sushi spot ZZ’s, owned by Mario Carbone‘s Major Food Group (also the masterminds behind Carbone, where Ye has been several times as of late). The 24-year-old and Yeezy designer were both laughing as they made their way out of the Arts District hotspot at 3:30 a.m. It’s no surprise the two were there late: beyond being a dinner spot, ZZ’s also has a popular upstairs speakeasy to keep the party going.

The Chicago-born superstar rocked his usual go-to leather, with a collared snap button jacket, along with a t-shirt underneath and black pants accented with white paint stains. He swapped out his Balenciaga X Croc boots with a pair of his black Yeezy resin slides (worn with socks). Chaney was also in all-black, choosing a skintight plunging cat suit just like Kim would wear. She kept her dark hair back in a bun, accessorizing with the shades, a black Birkin bag and leather to-the-knee boots. 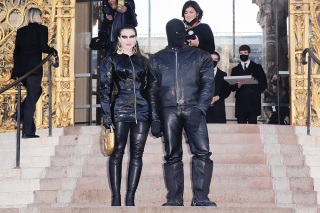 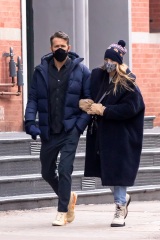 The stunner has been seen in a number of Kim K inspired looks as of late, including one all-Balenciaga one at Nobu with Kanye. She wore a turtlenecked cat suit, the black Motorcycle detail boots and her Birkin for the dinner date. Notably, Kim wore the same boots in the new Demna directed campaign and has been wearing the brand non-stop in recent months — particularly their gloved catsuits in an array of colors (bright pink, brown, royal blue and black).