Laverne Cox may have seen ‘Encanto’ twice but that didn’t stop her from calling it ‘Enchanto’ when talking to the film’s composer, Lin-Manuel Miranda.

Laverne Cox had a bit of a verbal faux pas while hosting the red carpet for the 2022 SAG Awards. Thankfully, she didn’t talk about Bruno but she did slip up when trying to pronounce the hit Disney film Encanto. Instead, she called it “Enchanto” when talking to the film’s composer and Tony Award-winning artist Lin-Manuel Miranda.

“Congrats on ‘Enchanto,’” she told the Hamilton composer. “Girl, I’m so happy for you. You deserve it. I am just so thankful for this movie. I’ve watched it twice, and it’s brilliant. Congratulations, have fun tonight, you’re everything.” Even though she saw the film twice, it seems that the film’s title didn’t quite stick with her. It wasn’t the only awkward moment that the Orange Is The New Black star had on the red carpet. When speaking with Will Smith and Jada Pinkett-Smith, she brought up their “entanglements” and neither seemed too pleased about it.

The SAG Awards went down on Sunday, Feb. 27 at Barker Hangar in Santa Monica, California. Like the year prior, there is no host but the night has gone on smoothly with a number of stylish presenters. Some of the star-studded nominees included A-list actors Lady Gaga, Will Smith, and Reese Witherspoon. 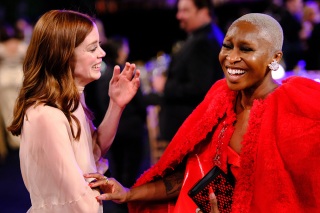 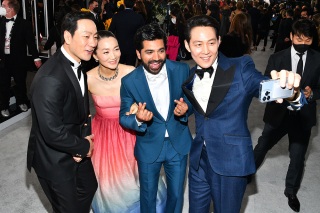 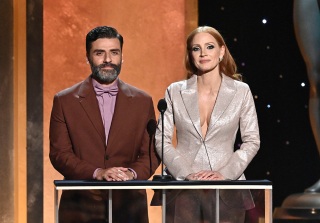 Some of tonight’s big winners include Jessica Chastain for The Eyes Of Tammy Faye, Will Smithfor King Richard and Michael Keaton for Dopesick. Succession and Ted Lasso took the win for best TV shows while CODA pulled out the win for motion pictures. There were definitely some heartfelt reunions that went down including Lisa Kudrow and Mira Sorvino who starred together in Romy And Michele’s High School Reunion, Kerry Washington, and Tony Goldwyn from Scandal and Lady Gaga and Bradley Cooper who melted hearts in A Star Is Born.

While not everyone won an award, some stars definitely won the red carpet. Reese Witherspoon spiced up the traditional little black dress with a baby blue sash and some serious bling. Caitriona Balfe sizzled in a red gown with a plunging v-neck. Vanessa Hudgens killed it in a curve-hugging light green, satin dress. Plus Lady Gaga dazzled in a white and gold dress. It’s safe to say that the red carpet had some iconic looks this year!

11 Ted Lasso Gifts That Will Add Positivity to Your Life