Reunited and it feels so good! Maksim Chmerkovskiy had an emotional reunion with his wife Peta Murgatroyd after fleeing Ukraine amid the Russian invasion.

Maksim Chmerkovskiy, 42, and Peta Murgatroyd, 35, had the sweetest airport reunion landed in the US after fleeing Ukraine. The Dancing With The Stars had an incredibly difficult time escaping as Russian attempts to invade Ukraine but he has made it out and his and Peta’s relief is evident. The two greeted each other with a passionate embrace when Maks landed. He wore a light blue long-sleeved shirt and tight black pants as he lifted Peta mid-hug as she rocked a black jumpsuit.

The dancer couple was also spotted walking hand-in-hand as they left the airport. The two were clearly happy to see each other after Maks’ arduous journey. He chronologized his experience from the start when Russia first started attacking. He uploaded a number of Instagram videos giving fans a firsthand look at the crisis. “There’s ALWAYS another way! WAR is NEVER an answer!” he captioned one post.

“I’m getting really emotional. It’s been a little difficult,” he said in one of his videos. “I stay strong, and I don’t show it, but I want to go back home, and I realize that I have the way to. I realize that I have a different passport, and my family’s far away, and what I’m realizing is that my friends whose kids are here, and whose moms, dads are here, and elderly people are here. They can’t just escape.”

Celeb Couples Who Are Stronger Than Ever In Quarantine — PICS 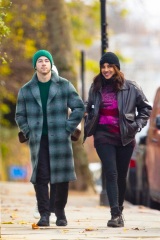 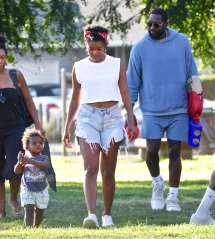 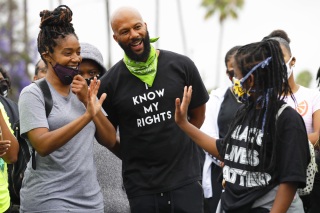 Soon after, he started his own escape attempt. Unfortunately, the first attempt didn’t work out for him. “A lot of fighting everywhere. Streets are crazy. At one point, I got arrested,” he said in another Instagram update. “That was probably the least traumatizing moment in this whole thing  for as far as Ukraine is concerned, but for me, it was just a reality check.”

Fortunately, he was able to find a way out of Ukraine. He took a train to Poland but told fans that the journey was not easy. He explained that he went 31 hours with no sleep before he finally reached his destination in Poland. Thankfully, Peta’s prayers were answered and Maks has made it back to the United States safe and sound.