Maksim Chmerkovskiy Shares Post Of Himself In Ukraine After Russian Attack: ‘War Is Not The Answer’

The ‘Dancing With The Stars’ pro took a heartfelt video of himself from his home country’s capitol and pleaded for peace.

Maksim Chmerkovskiy, 42, showed how heartbroken he was by the Russian attacks in Ukraine on Thursday February 24. The Dancing With The Stars pro posted videos mourning the attacks in his home country as he filmed in the capitol city of Kyiv. In one of the videos, he started tearing up, and said that he wanted to go home, as he got choked up for his friends and family who couldn’t leave as easily as he could.

In the description for his first video, Maksim pleaded with those in power in Russia to act peacefully and resolve their issues with Ukraine. “There’s ALWAYS another way! WAR is NEVER an answer!” he wrote, while saying that the attacks brought back memories from why his family had left the country during the 90s. The DWTS star also said that he was going to do his best to keep his fans and followers informed about everything happening in Kyiv.

‘Dancing With The Stars’ Season 30: Photos Of Tyra Banks & More 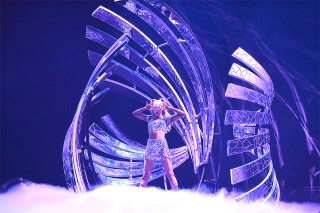