Michael Bolton’s Ex-Wife: Everything To Know about His Spouse Of 15 Years, Maureen McGuire

Michael Bolton was married to Maureen McGuire for 15 years before fans got to know him as a music icon of the early ’90s. Find out more about Michael’s ex-wife here.

Michael Bolton, a successful pop-rock and smooth rock singer, became a ’90s music icon, winning Grammys for his versions of “How Am I Supposed To Live Without You” and “When A Man Loves A Woman.” Perhaps what you didn’t know about the soulful singer was how he started as the front man for hard rock band Blackjack in the late 1970s. You may have also not known that he got married at a young age to Maureen McGuire and the pair welcomed three girls during their 20s!

Below we break down all you need to know about Michael’s ex-wife Maureen and where the two stand today.

Michael and Maureen tied the knot in 1975 and maintained a strong marriage during his early years as a musician, before he made his big breakout with The Hunger in 1987. The pair ended up divorcing in 1990, and Michael has spoken about what it was like to be married young and navigating life as a father in his 20s with Maureen.

“By my late 20s I was already married and had three daughters. Guys in their 20s don’t have a clue who they are as human beings,” Michael told The Sydney Morning Herald in 2019. “They know what they want to become — a doctor, a lawyer, a politician — but the proper study of one’s own self?” He continued, “Men don’t get around to that until their 30s or 40s, which is roughly 10 years later than most women, who seem to know exactly who they are.”

Michael Bolton Through The Years: Photos Of The Crooner Then & Now 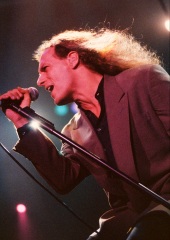 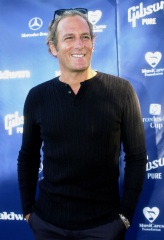 After getting married, Michael and Maureen went on to have three daughters together: Isa, Holly, and Taryn Bolton, all born two years apart from each other. The Boltons are extremely private, so not much is known about the three girls, although according to an Instagram account attributed to Isa, she runs Loved, a women’s boutique and consignment shop. Isa is also a proud mom of two sons. On Feb. 23, 2021, she posted an Instagram Gallery of her with her family, including dad Michael. According to an Instagram associated with Holly, she’s “living, loving, and laughing in LA” with her young son. She also shares photos of her family, including one where Michael teaches her son to play cards. The girls don’t have any photos with mom Maureen that we can see of, and Maureen doesn’t seem to have any social media channels.

“It’s just such a great source of joy, looking in their eyes,” Michael told PEOPLE in 2019 of his six grandchildren. Michael also said that “GPa” isn’t allowed to put the kids to sleep. “I’m not going to be putting [the grandkids] to sleep,” he said. “Ten minutes after they think the kids are going to sleep and I’m reading to them … I’m chasing them around the room!”

Michael had an alleged tryst with Cher before the divorce

Just before Maureen and Michael finalized their divorce, the “How Can We Be Lovers” singer allegedly engaged in an affair with another popular singer of the time: Cher. Although that detail may surprise people, the pair’s rumored hookup took place while they were working on new music together, like when Cher recorded Michael’s song “I Found Someone” which was released in 1987. Cher also recorded two more hits of Michael’s, including “It’s Been Hard Enough Getting Over You” in 1987 and “Emotional Fire” in 1989. No word from Maureen concerning the alleged affair or if the former couple was separated/dating other people at the time.

She is now a yoga instructor in Connecticut

According to a 2017 article in a local Connecticut website, Maureen is back in her home town of East Haven, Connecticut and works as a yoga instructor in the area. Following her divorce from Michael in 1990, Maureen returned to East Haven and didn’t plan on staying, however she ended up planting new seeds. “When I came back, a friend had said the Town of East Haven was looking for a fitness instructor,” Maureen stated. “I got in touch with [Recreation Director] Lou Pane, who has been nothing but supportive the whole time.”

As a dancer in her early life, Maureen incorporated that experience into her fitness classes, which focused more on aerobics and dance, but she always ended with a short yoga session. Pretty soon, people began to ask “for full classes,” and so she began a new chapter by getting certified and becoming an official teacher.

“Teaching is my passion,” Maureen told the outlet. “That’s the power of yoga—to bring people back. Yoga is a potent agent of transformation. People come for the relaxation and leave with a heightened awareness of their soul. It is profound in its ability to heal and to change.”

She is NOT a former TV news anchor/journalist

Maureen unfortunately shares the exact same name with another public figure: Maureen McGuire, a former television news anchor for WROC-TV Channel 8 and reporter from Rochester, NY. Apparently people have gotten the two mixed up for some time now, causing the TV anchor Maureen to clear up any confusion on her Twitter. “Happy Friday!” Maureen wrote on May 21, 2021. “This is as good a day as any to let you all know I was never married to singer Michael Bolton.” At least all parties can have a decent laugh about the situation!