Pamela Anderson will star in ‘Chicago’ at New York’s Ambassador Theatre for 2 months. She said in a statement that she’s ‘inspired by the unexpected’ in regards to her new career move.

Pamela Anderson is coming to Broadway! The 54-year-old actress will make her theater debut as 1920s seductress Roxie Hart in the popular musical Chicago, according to the Associated Press. Pam will be on the stage at the Ambassador Theatre in New York from April 12 to June 5.

“From ‘Baywatch’ to Broadway. I am inspired by the unexpected,” Pamela said in a statement to the AP. “This is it, and I will not hold back anymore. I am letting go. I am ready to see what I’m capable of. For ‘Chicago,’ I’ll be putting all my cards on the table. I am doubling down — on me,” she added.

Chicago started as a play in 1926 and inspired the Broadway musical that kicked off in 1975. The main character, Roxie, is a housewife who hires a slick criminal lawyer after she murders her lover. Roxie has been played by various celebrities in different iterations of Chicago over the years. Those stars include Erika Jayne, Lisa Rinna, Brooke Shields, Melanie Griffith, Christie Brinkley, Brandy Norwood, and Renee Zellweger.

Pamela Anderson Through The Years — Photos Of The ‘Baywatch’ Bombshell 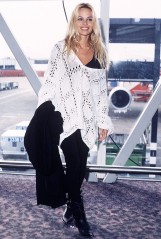 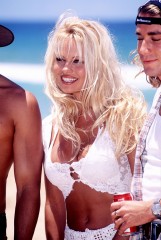 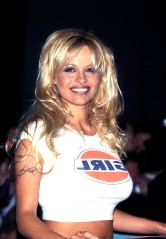 It’s exciting to see that Pam’s taking her talents to Broadway. She’s best known for her TV roles in Baywatch, Home Improvement, and V.I.P, plus the films Raw Justice, Barb Wire, and Superhero Movie. Her life has been thrusted into the spotlight recently thanks to Hulu’s Pam & Tommy, the series centered on her and her ex-husband Tommy Lee‘s sex tape scandal, which erupted in 1995. The show stars Lily James and Sebastian Stan.

Pam was not involved with Pam & Tommy. She is, however, working with Netflix on an upcoming documentary about her life. The streaming service announced the doc via Twitter on March 2. “The film, which has been in the making for several years, will feature the pop culture icon setting the record straight as she looks back on her professional path and her personal journey,” Netflix said.

Brittney Griner’s Wife Devastated Over Detainment, ‘No Words To Express This Pain’