Prince George was a regular little rascal at a rugby game with Prince William and Kate Middleton, hilariously sticking out his tongue while watching with his parents.

Sometimes, the sidelines are the most fun place to be…at least Prince George, 8, made them look that was as he hilariously stuck out his tongue and whispered with parents Prince William and Kate Middleton while attending a rugby match on Feb. 26. The trio were all smiles, class, and British spirit in new photos, where they chuckled amongst themselves, sang along to the national anthem, and cheered on their home team.

Will and Kate enjoyed a special outing with their eldest son to see England’s Six Nations match, where the team faced off against Wales. The family all chose British red-white-and-blue clothing to celebrate the home team. Will chose a pop of color with a red tie, while Prince George bundled up in a red and navy Ralph Lauren puffer. Kate looked put-together and glamorous as always in a houndstooth blazer, black turtleneck, and English Rugby scarf. 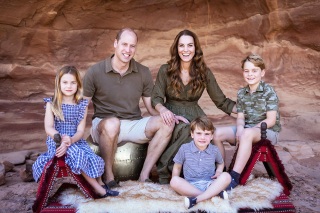 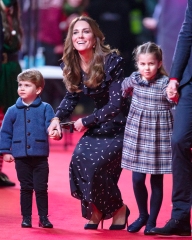 When little George wasn’t sticking his tongue out while dad Will and mom Kate focused on singing, he was laughing and smiling as Kate whispered something in his ear. As both George and Will looked up, the resemblance between the father-son duo was as clear as day, from their matching sandy blonde hair to their piercing blue eyes. Whether clapping for the home team or chatting amongst themselves, George, Will, and Kate looked as happy as could be at the Sunday match.

Kate’s attendance at the rugby game at Twickenham Stadium marked her first as an official patron of the Rugby Football Union, a role she took on from Prince Harry. Though Harry once loved to cheer for his country at English rugby matches, he had to give up his patronage after he and his wife Meghan Markle stepped back from their roles as senior royals and began working towards financial independence.

Rick Ross Cuts Down His Own Trees on Atlanta Property, Saves $10k