The royal couple looked the part of guests of honor at the NAACP Awards on Sunday, where they accepted the Presidential Award with a moving joint speech.

This year’s NAACP Image Awards are officially a royal affair! Prince Harry and Meghan Markle were honored at the event with the Presidential Award, bestowed in recognition of special achievement and distinguished public service. The duo, who called the award a “true honor” and said they were “proud” to support the NAACP in a statement. They accepted the award with a joint speach on Saturday, Feb. 26.

To accept the award, Meghan chose a sparkling one-shoulder gown and continued the mermaid aesthetic with long, romantic waves. Harry looked dapper as always in a black tuxedo and trimmed beard. The couple was gracious and thoughtful onstage, emphasizing how they were “deeply humbled” and how much it meant to be highlighted while surrounded by such “illustrious nominees.”

In their joint speech, Meghan emphasized how the “inspiring” legacy of the award can be furthered today by instilling additional voter protections. Harry took a moment onstage to acknowledge the people of Ukraine, sharing that they “urgently need our continued support as a global community.” 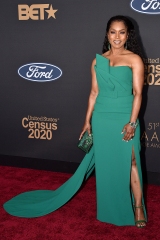 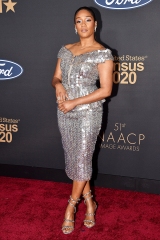 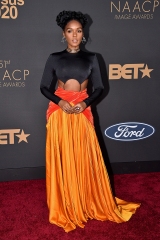 Meghan also recalled how she and Harry founded the Archewell foundation in the months after George Floyd was senselessly killed by Officer Derek Chauvin. after Derek held his knee on George’s neck for nine minutes and twenty-nine seconds. Meghan explained how that violent act evoked “centuries of unhealed wounds,” and shared: “In the months that followed, as my husband and I spoke with the civil rights community, we committed ourselves and our organization, Archewell, to illuminating those who are advancing racial justice and progress.”

In receiving the Presidential Award, Harry and Meghan join such esteemed company as The Reverend Jesse L. Jackson, Condoleeza Rice, and Colin Powell. NAACP President and CEO Derrick Johnson shared in a statement: “We’re thrilled to present this award to Prince Harry and Meghan, the Duke and Duchess of Sussex, who together have heeded the call to social justice and have joined the struggle for equity both in the US and around the world.”

It’s been a busy few weeks for Harry and Meghan, as their prominent position on the world stage has them facing a wide variety of new challenges. From making a powerful statement on the Ukraine crisis to speaking out about COVID-19 misinformation on Spotify, Harry and Meghan have always been vocal about the issues that matter to them, especially when it comes to protecting children Archie, 2, and Lilibet, 6 months.

Further explaining their selection, Derrick also emphasized Harry & Meghan’s partnership with the organization through their Archewell foundation, which recently established an NAACP-Archewell Digital Image Award honoring change makers in the tech and civil rights space. Derrick emphasized how the award will “inspire the next generation of activists,” like inaugural recipient Dr. Safiya Noble, an internet studies scholar at UCLA who co-founded the UCLA Center for Critical Internet Inquiry (C2i2).