Kelly Stafford, wife of L.A. Rams QB Matthew Stafford, is detailing a harrowing experience she had in her early 20s with a boob job gone wrong.

Los Angeles Rams quarterback Matthew Stafford‘s wife, Kelly Stafford, recently shared how she got “the worst boob job you have ever seen” on a recent episode of her podcast, The Morning After. Kelly, 32, was in her early 20s at the time of the procedure and was dating her now-husband while they were both students at the University of Georgia. Kelly revealed that Matthew didn’t want her to get surgery, but she wanted to do it for herself.

“I saved up a ton of money,” she said. “I worked in high school, from birthdays, I just saved it all. I dressed so terribly, I wasn’t buying clothes, that wasn’t my thing. Again, still not really my thing.”

She continued, “I went and got a boob job. And Matthew was totally against this. He was like, “Do not do it, please don’t do it.” And I was like, “Love you, but I’ve wanted this for a long time, and this is about me, it’s not about you.”‘ The mother-of-four didn’t share when she officially got the procedure, but some of her earlier Instagram photos show it was likely in the early 2010s. 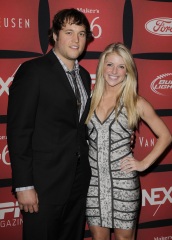 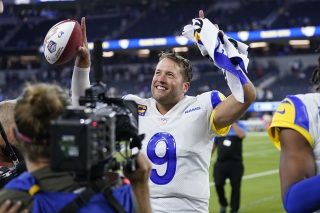 At the time, Kelly’s husband was playing for the Detroit Lions, and she revealed the criticism she faced from the corners of media in that area. “What’s worse is that the Detroit media realized and started saying that Stafford paid for a boob job for his girlfriend,” she recalled. “And immediately, I was like, “Hold on now! I paid for it myself!”‘

She then shared that when she told her doctor a few months later that she wasn’t happy with the results, he told her to give the implants a little time to “settle.” They never settled in a way that was sufficient, so a year later, she had them drained.

“It was when they were doing saline because silicone was dangerous,” she said.

Luckily, the draining procedure turned out okay and Kelly and her hubby are enjoying life with their four children — fresh off his big Super Bowl LVI win with the Rams! Kelly, née Hall, has been cheering on her husband for a long time, starting out as an actual cheerleader to his football player at UGA.

Matthew proposed in 2014 and the lovebirds tied the knot in Atlanta, Georgia in 2015. The lavish event gave guests personalized neon trucker hats and had a Nike shoe bar (the brand sponsors Matthew).