Val Chmerkovskiy Reveals Brother Maks Is In A Bomb Shelter In Kiev: This Is Why Our Parents ‘Fled’

While giving a heartbreaking update on his brother trapped in Ukraine, ‘DWTS’s Val Chmerkovskiy pleaded with his Russian friends to ‘stand up to your dictator’ before more innocent people were killed.

“My parents fled this country for this exact reason,” Valentin “Val” Chmerkovskiy posted to Instagram on Thursday (Feb. 24). The Ukrainian-American dancer shared a video from The New York Times that showed citizens fleeing the city of Kyiv as Russian troops invaded the country. Val, 35, said that his parents left Ukraine “not because it wasn’t good to them, but because their kids would see war eventually. It’s a cruel irony that 28 years later, my brother [Maksim “Maks” Chmerkovskiy] is in a bombshelter (sic) in [Kyiv].”

Val wrote that had his parents not decided to leave their native country, he would “be on the front lines defending my home right now. And the most heartbreaking thing of all, I would be either killing or dying at the hands of my fellow brothers. The Russian people don’t want this!! We stood by each others’ side. We loved and celebrated one another. I speak Russian, yes, but make no mistake about it, I am a proud Ukrainian, and now, the world will finally know the difference.”

“Slava Ukraini all day, every day,” added Val. “And to my Russian friends, this might be the best and only time to stand up to your dictator.” 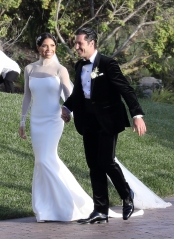 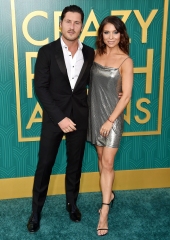 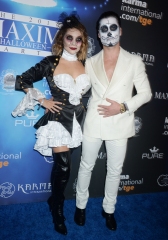 Valentin posted another IG Story afterward, one detailing the thirteen Ukrainian soldiers killed defending Zmiinyi (Snake) island. Ukraine says that the soldiers were bombarded by air and sea, while Russia denies killing anyone and says all the troops surrendered, per the BBC. “This conflict will not end with surrender,” wrote Valentin. “When the military will go down, there will be partisan and guerilla warfare for as long as there are Ukrainians still living. Both sides will have massive casualties for many years to come. Mothers will weep, kids will grow up without fathers, and for what??”

Hours before Val’s message, Maks, 42, posted two videos filmed in the capital of Kyiv. “There’s ALWAYS another way! WAR is NEVER an answer!” he captioned the first video, showing the city in a panic while air-raid sirens went off in the background. “I stay strong, and I don’t show it, but I want to go back home, and I realize that I have the way to,” he said in the second video. “I realize that I have a different passport, and my family’s far away, and what I’m realizing is that my friends whose kids are here, and whose moms, dads are here, and elderly people are here. They can’t just escape.”

Sorry, Normcore Will Always Be Relevant

Ukrainian Father Sobs As he Sends Daughter Away In Heartbreaking Video