[ The Most Iconic Hotels of the 21st Century]

From the moment they take charge of your car in the spacious lot opposite the hotel entrance, the friendly and relaxed staff are as professional and attentive as one would expect from a Palace category property. There are 40 traditionally styled bedrooms and suites, with a separate 5-bed house, La Maison de Constance, also available. The entire accommodations, some with balconies absorbing the never-ending views, are sumptuous and opulent. 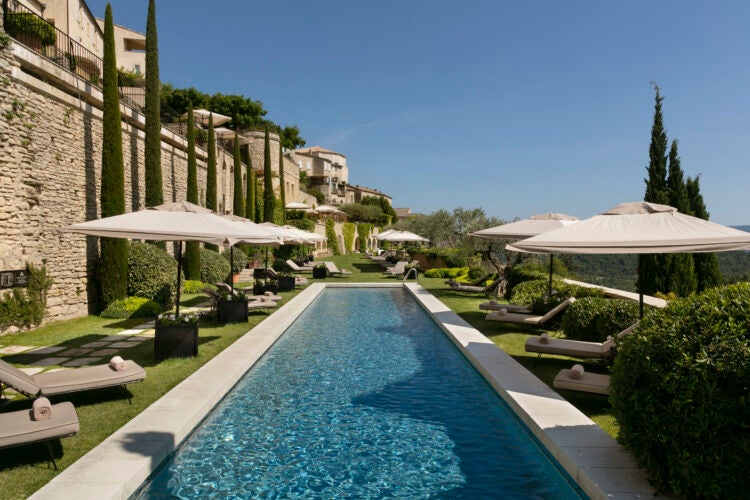 The various facilities are accessed on the different floors of its 10-story layout. From the one where the children find their sprawling “Summer Camp”, with its own pool, games room, and arcade, to the adult’s pool splayed out across a secret grassy sanctuary overlooking the Luberon Valley. The 2-story spa area is a particularly impressive space. In a collaboration with leading French brand Maison Sisley, it presents 17,000 sq. ft of pampered and supremely stylish seclusion, boasting a hammam, sauna, indoor as well as outdoor treatment areas, and a pool that’s bigger than most regular hotel pools. Cavernous corridors of almost spiritual tranquility channel the nearby 12th Century Sénanque Abbey in a superbly soporific escape hidden within an escape. 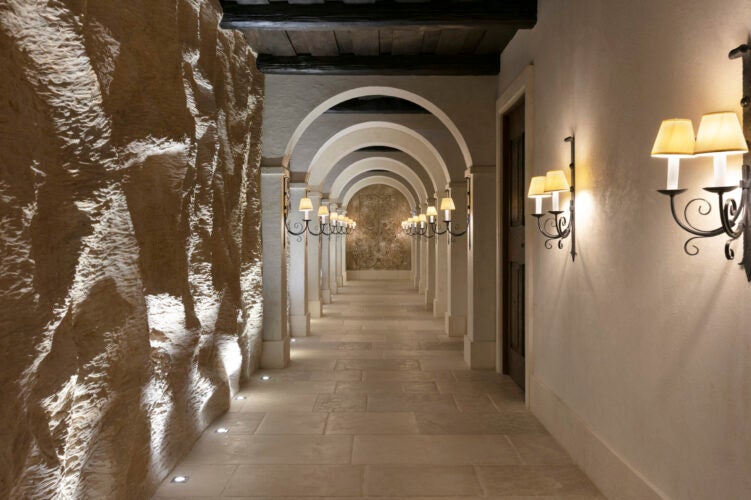 The entire property based around its 16th-century core was subjected to a 33 million Euro restoration in 2014 under the revered direction of designer Christophe Tollemer. He’s deployed an uncompromisingly period design template, that riffs off an 18th-century bourgeois/aristocratic country way of life. Acres of wood paneling, restored tile floors and stone fireplaces all embellished with capacious ultra-comfy beds and Provence fabrics set the suitably traditional scene.

The staff are uniformed in elaborate folk-inspired outfits with straw boaters for the men, and bodices and flouncing dresses for the women. Portraits of serious-looking patrician Provençal worthies stare down from all around the hotel including from within the rooms, whilst an array of old books are liberally placed around the property.

It’s tempting to wonder whether this deluge of adornments is all reproduction and veering somewhere a little kitsch. But then that’d be wrong and wrong again. It’s a strong style statement that’s for sure, but all of those pictures, books and artefacts really are original. Antique fairs and rare book shops were relentlessly scoured to instill the gravitas and depth that Tollemer was striving for with the period picture he has so resolutely painted throughout the property. Ultimately, it’s a fabulous, richly adorned, somewhat playful, modern-day invitation to live, if not quite like a king….then, maybe, a Baron.

[ The Most Beautiful Wineries to Visit in France] 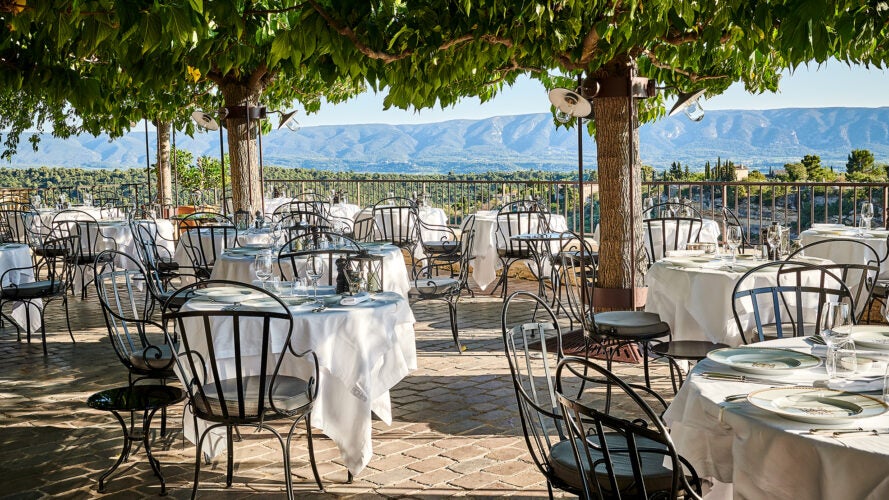 Some of the views from La Bastide’s various dining locations are so jaw-droppingly spectacular they could probably get away with serving them up with mediocre food offerings. But this is Provence at its absolute best, steeped in languid summer-strewn sophistication, embellished with the most immersive gastronomic moments available anywhere. One thing dining is definitely not at La Bastide, is mediocre.

The large terrace of L’Orangerie, where breakfast, lunch and dinner are taken, offers up a refined interpretation of Provençal and Mediterranean cuisine presiding over a landscape that stretches into infinity. The Airelles Brunch, in particular, is an elaborate display of culinary dexterity, flamboyantly presented every Sunday, which has become a firm fixture of the surrounding social calendar.

The smaller but equally sublimely situated, Clover Gordes, is La Bastide’s invitation toward the more refined possibilities within French haute-cuisine. Jean-François Piège, presiding over six highly regarded addresses in Paris, maintains his only presence outside of the French capital at La Bastide. The cooking at his 2-Michelin starred flagship, Le Grand Restaurant, is described by Michelin as “the quintessence of talent”, whilst in 2021, the outrage generated in sectors of the French press at the removal of his star from La Poule au Pot, veered dangerously close to fomenting another French revolution. 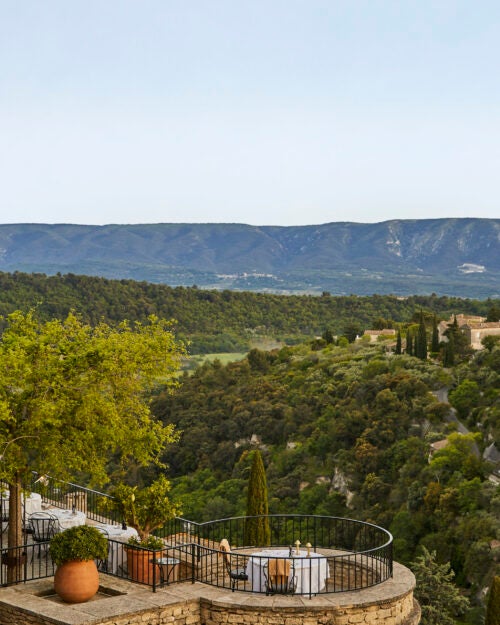 Clover Gordes delivers lightly balanced cooking that’s heavily oriented towards local produce. It draws from both his Clover Grill, which specializes in grilling and rotisserie, as well as Clover Vert, where Piège offers a predominantly vegetarian menu. Be in no doubt, one of the current titans of contemporary French cuisine is back there somewhere conducting the culinary orchestra.

Recently opened TIGrr, with outposts in fashionable Megève and St Tropez, presents Asian-fusion cooking embedded into a livelier overall vibe. Located next door to the main property, with a D.J. in place and late-night intent firmly on the menu, it’s far enough away from those who want to sleep yet close enough for those who don’t. Within the town itself, La Bastide also has a branch of La Maison Ladurée, the iconic salon du thé founded in 1862, as well as La Bastide de Pierres, an utterly charming, laid-back trattoria straight out of Italian central casting. 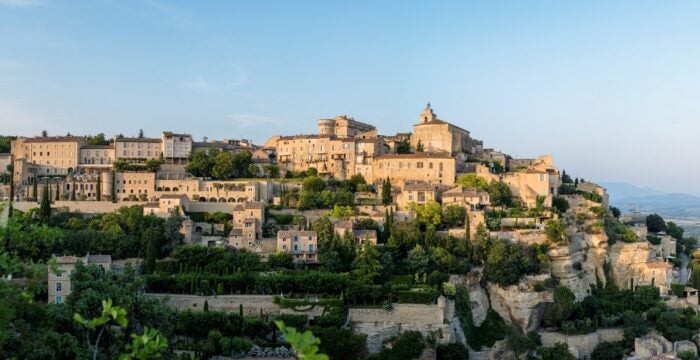 The village of Gordes, where Ridley Scott filmed Peter Mayle’s later novel, A Good Year, for his 2006 rom-com starring Russel Crowe, has fallen victim to a degree of over-tourism, not least as a result of such publicity. During the day, the quaint streets that Marc Chagall would have shared with the few residents that were still left, are now often thronged with day-trippers. La Bastide, though, not that those outside would realize it, is a far-ranging multi-leveled universe of rarefied seclusion wherein refuge can be sought until the evening. It is then, that this still delightful village is probably best explored.

The surrounding landscape remains a wondrous world of slow-paced hedonism waiting for as long or as short a drive as is desired. From atmospheric Avignon, around 40 minutes away with its July festival and incredible Palace of the Popes, the world’s largest medieval gothic palace, and equally enchanting Aix-en-Provence, to the dream-like villages of the Luberon, like an unending sequence of stunning film-sets, potential itineraries are limitless.

Whilst La Bastide can provide a classic Citroën 2CV for those enthused by a little added romanticism, rental cars are best collected at Avignon’s TGV (high-speed train) station, the ideal entry point into the region from London and Paris. Eurostar’s pre-pandemic non-stop train from London to Avignon has yet to be reintroduced but with a simple platform change in Lille, the journey is still only six hours. Eurostar’s impressive Business Premier Lounge at London’s St Pancras station along with First Class travel on both sectors is all available, whilst from Paris, the journey is a mere two-and-a-half hours. In addition, SNCF, the French rail operator, recently allowed US-based, leading peer-to-peer rental company Getaround to position vehicles alongside the regular rental companies in the secure sector in front of the station.

This Ain’t Your Father’s Chronograph

The Secrets and techniques Behind Charlize Theron’s Jaw-Dropping…