There’s always a certain kinda of buzz when another adidas SPEZIAL collection comes around.

Since 2015, the premium sub-line of adidas – which is curated by Gary Aspden – has become renowned for diving into the Three Stripes’ extensive archives, and reimagining heritage styles through a modern lens for each of its collections.

Now fresh off the back of a second sneaker release with former Oasis frontman Liam Gallagher, Aspden and SPZL return for Summer 2022 with a new array of pieces that effortlessly blend a 1970s aesthetic, with modernized military detailing.

Compared to earlier collections, SPEZIAL has somewhat evolved into a more mature beast in recent years, swaying away from a brand many thought was solely designed for the terraces. And while this may not have been intentional, it’s certainly working out well.

“In the earlier seasons, there was more of a focus on finding overarching stories to tell for each collection,” Aspden tells Highsnobiety.

“As the brand has become more established, this kind of storytelling has become less of a priority and now it’s simply about making a solid range of products that merchandise together cohesively.”

Typically the Summer 2022 collection – which is set to drop on August 12 via both adidas and Wellgosh – comprises both footwear, apparel, and accessories, with the former often playing the leading role.

“The Warszawa SPZL is a completely new hybrid that borrows inspiration from some of the vintage adidas shoes in my personal archive,” says Aspden. “The key point of difference between the Warszawa and other European ‘City series’ shoes is the toe overlay.”

“We found a colour palette that referenced the architecture of Warsaw and opted to brighten those colours up. We took what was a cream into a brighter yellow and the brick red of the rooftops in a much deeper red. We wanted the shoes to have a strong and distinctive identity so we felt that the colours needed to be bold.”

Accompanying the collection is a campaign with Working Men’s Club lead singer Syd Minsky-Sargeant, who is followed around his hometown of Todmorden, England, exploring the electronic music scene and the nation’s industrial Northern landscape.

For SPEZIAL, music is paramount. Since its inception the brand has continually drawn inspiration from British music scene and the various subcultures that surround it. Whether its link-ups with Liam Gallagher and New Order, or a homage to British soul and the “Second Summer of Love”, music remains at the brand’s core.

On a number of occasions throughout the interview, Aspden describes many of his experiences with SPEZIAL as “learning on the job,” which is refreshing for someone who has been working with adidas for over twenty years.

Whether it’s the fabrics being used, the designs, or even the amount of product, it’s been a constant learning process for a brand Aspden describes as remaining “boldly unaffected by trends.”

“I like the fact that Spezial appeals to the most ardent adidas fanatics,” continues Aspden.

“At the same time though, I like it to be worn by others who know nothing of its references, but simply like the way that it looks. I think that’s important.” 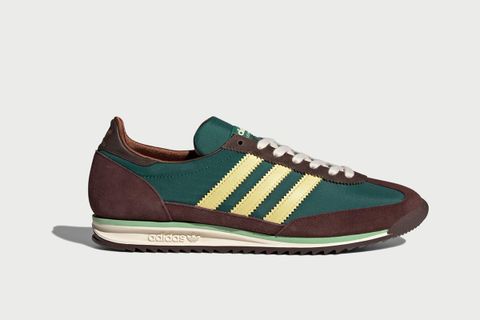