In 2019, Swiss watchmaker Armin Strom’s Gravity Equal Force watch debuted as the world’s first automatic timepiece with a constant force transmission; allowing for consistent power to its balance wheel. The model features a sophisticated black dial, and soon, you’ll be able to shop its vibrant alternative that totes a jungle-green guilloché dial.

Handcrafted by Finnish watchmaker Kari Voutilainen, the dial features a Grain d’orge horizontal pattern that follows the lines of the watch’s three bridges. The eye-catching green color highlights its off-center dial’s hour and minutes, as well as the subdial. For contrast, the watch’s steel hands and bezel help the dials stand out against the matte black PVD-coated movement plate. The 41 mm timepiece also features a slim bezel and lugs profile that allows its hand-finished movement to be visible from all angles. Limited to just 15 examples, the watch will retail this month for $22,900.

The off-center dial and subdial in the vibrant shade of green.

Remaining true to Strom’s original release, you can expect the Gravity Equal Force Jungle Green watch to arrive with the same unique automatic winding movement that features a turning micro-rotor on its dial side. Overall, the watch is composed of 202 individual parts, 28 jewels and delivers 25,200 vph—which isn’t the fastest, but will surely put on a show. The timepiece also has a power reserve indicator integrated onto its mainspring barrel, alongside it stop-work declutch mechanism that delivers power to the balance. Its power reserve will hold you for 72 hours, but its 3 ATM water-resistance proves it’s not made for any spontaneous deep diving. 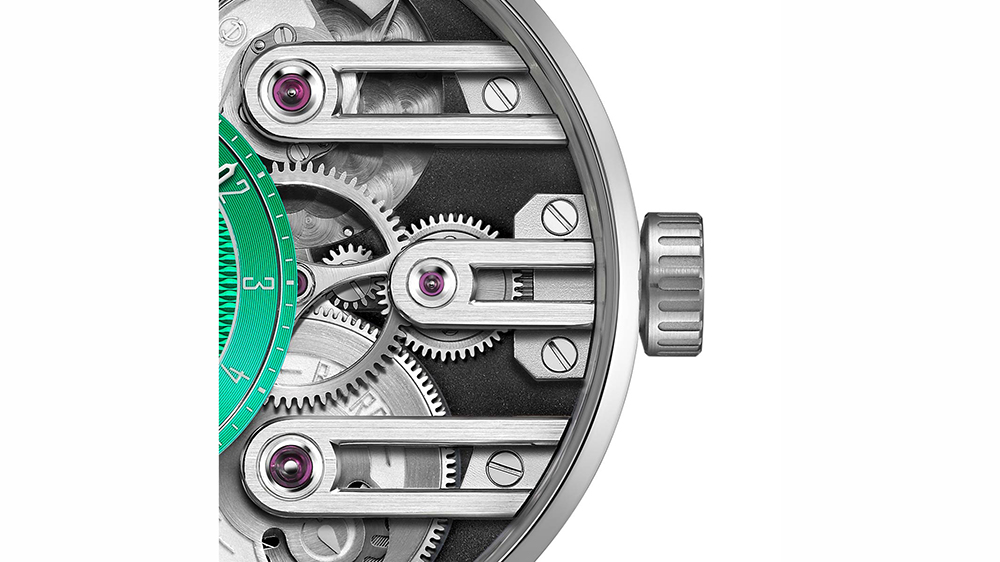 A look at the figure’s internal movement from the dial side.

Armin Strom launched his watchmaking business in 1967, as a watch shop in Burgdorf, Switzerland. He went on to present its first branded timepieces at the Basel Watch Fair in 1984. Fans of the watchmaker will recall that the company was known for specializing in watch restorations and hand skeletonizing before it became a mainstream brand. In 2009, Strom transferred ownership of the brand to Serge Michel and Claude Greisler, who both visited his shop often as children. Led by Greisler, a master watchmaker, the manufacturer focuses greatly on “transparent mechanics” that showcase how the watches work.

The Gravity Equal Force Jungle Green watch will be delivered with a black alligator leather strap; however, it won’t come in an alternative shade of blue like the former edition’s. But you can choose from a traditional Ardillion buckle or a double-fold clasp in stainless steel to keep it secured to your wrists. To reserve your own, visit the Armin Strom website.

In The Title of Logic, Clarify My Love For Large Boots With Shorts

A Form of Guise Is on the “Street to Nowhere”