In its 125 year history, Globe-Trotter had never opened a store in the United States. That all changed this week with the debut of the British luggage brand’s newest flagship in Hollywood, California.

The recently opened LA store showcases a blend of contemporary and traditional design elements, which will be familiar to anyone who’s ever stepped foot in the brand’s London location. Shades of green and grey suffuse the space, alongside white displays and hardwood floors. Inside, you’ll not only find the brand’s suitcase models but also a “living room” where Globe-Trotter’s ample bespoke and customization services will be offered.

To celebrate the opening of the space, the company is also debuting an exclusive capsule collection. Dubbed the “Melrose” line, the drop features four pieces—a handbag-sized London square, an attaché briefcase, a carry-on case and the larger check-in model. The cases are crafted from durable Vulcanized fabric (a brand signature) and offered in ivory, with leather trim accents in three LA-inspired colors: “warm yellow,” “holiday orange” and “moss.” Extending the SoCal vibe further, they’re also marked with a multi-colored palm tree motif.

The new capsule collection will be sold exclusively at the LA location, which now joins Globe-Trotter’s London and Tokyo flagship in its portfolio. Although the brand moved to the UK in 1930, after being established in Saxony, Germany, its first flagship in London didn’t open doors until May 2014. The Tokyo store followed suit in 2016.

As you might expect, Globe-Trotter’s new space also houses its classic and collaborative luggage models. In addition to the familiar Centenary, Original and Deluxe collections, you’ll find cases made with brands such as Rowing Blazers and Disney, as well as with Tyler the Creator. 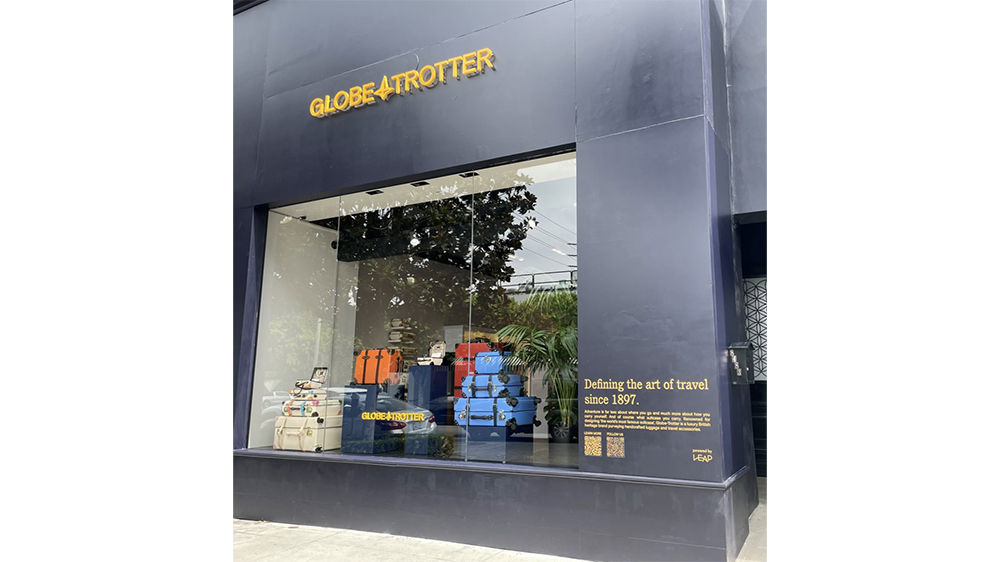 The exterior of the flagship store in LA

“We are really excited to open our first store in the US to respond to the continued growth that we have had in the past years at 400+ percent, and to be able to deliver the same experience our flagships in London and Tokyo currently offer,” Globe-Trotte’s executive chairman Vicente Castellano said in a statement.

Head over to the brand’s new LA digs to shop the ‘Melrose’ capsule collection in-store.