“I really only care about how the rug feels to me,” says Mikael Kennedy, proprietor of King Kennedy Rugs, discussing his unconventional approach to buying and selling. “If I fall in love with it, I’ll buy it. I don’t care about the provenance or anything else…I only buy what I love so that if I end up owning it forever, it’s not a bad thing.”

Based in Los Angeles, Kennedy is fashion’s favorite vintage rug dealer. Since getting into the biz in 2009, he has counted Ralph Lauren, J. Crew and Club Monaco as clients—all brands drawn to the rich heritage and intricately woven stories that can be found within Kennedy’s ever-growing collection of Persian and Navajo rugs. But his finds aren’t exclusively destined for shop floors and look-book photoshoots; Kennedy’s rugs wind up in the private homes of many non-fashion folks who appreciate old-world craftsmanship. Since 2020, he’s opened up his business with an online shop.

Mikael Kennedy in his LA showroom.

Kennedy’s fascination with floor-coverings began in the late aughts when, traveling on assignment as a photographer, he spotted an ancient Persian prayer rug from the late 19th century in western Massachusetts. “Every rug is a map of humanity,” he states. “You can trace travel patterns of different cultures in them and ways in which cultures come together—for good reasons or bad.” He began building a collection and then, selling his finds out of his Mercedes on the streets of New York.

His Persian rugs began attracting downtown trendsetters and soon, the style took on a new vogue. Thanks to the quality of raw materials and dyes used and expert weaving techniques, some of the finest rugs can endure for centuries. Kennedy’s collection is sourced from all over the globe and he works with third- and fourth-generation rug dealers who set aside exactly what he’s looking for. 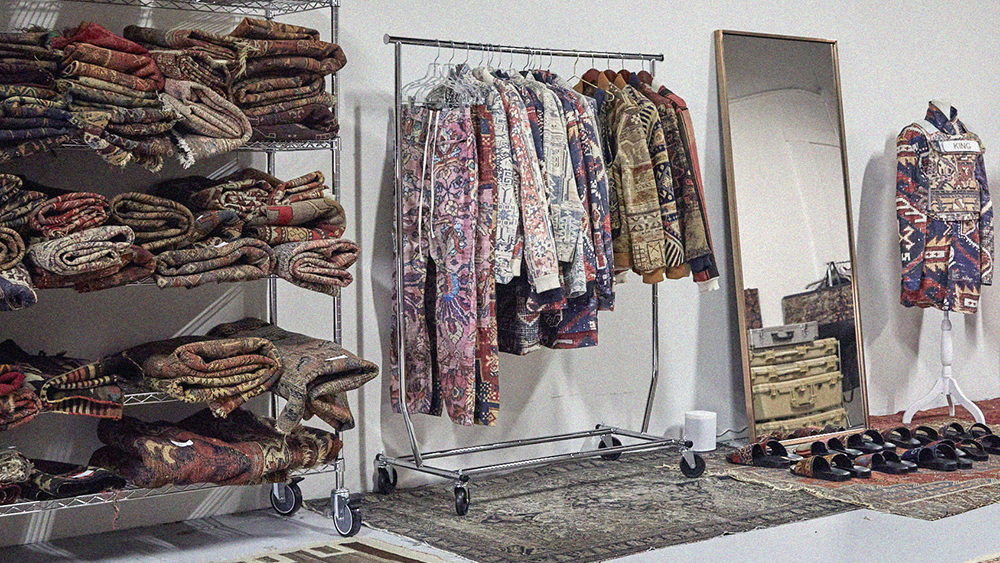 “I started out dealing primarily in Persian and Navajo pieces,” he says. When asked to define a Persian rug, he explains that they are more of a general term than a specific look: “They end up covering a large swath of the rug world but I found I was drawn to more geometrical designs, usually Kazak and Caucasian rugs, Armenian pieces.” All of these possess design traits that blur the lines between graphic modernism and folk art, which explains why they’re so popular: they look good beneath any number of styles.

In 2015, Kennedy realized that his wares could find success above ground, so to speak. Looking at these vintage rugs as textiles, rather than items of home décor, he began working with small, artisanal apparel and accessories manufacturers. It opened up a world of possibilities and he’s since gone on to make jackets, shirts, bags and shoes—all of which are one-of-a-kind and sustainable in their upcycling. Mr Porter, Todd Snyder and Nordstrom have all picked up Kennedy’s wearable wovens. 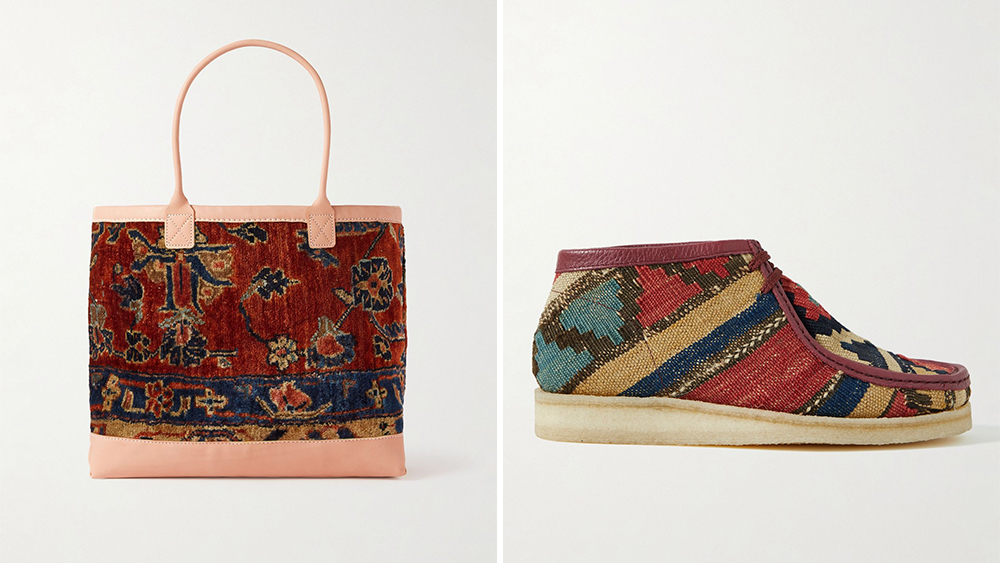 A vintage rug and leather tote bag ($650) and desert boots created in collaboration with Padmore & Barnes ($850).

More recently, he’s collaborated with Blackstock & Weber, a New York-based footwear brand that’s done with loafers what Kennedy has done with Persian rugs: make a stodgy staple hip. “I liked what [Chris Echevarria, Blackstock & Weber’s founder] was doing and his vibe, so I invited him by the studio when he was in LA and we hit it off. I gave him a bunch of rug scraps to see what we could make together, and the result was incredible,” he says of the partnership, which sees Blackstock & Weber’s signature penny loafer enveloped by an intricate, texture-rich remnant from Kennedy’s collection.

It’s a prime example of how old-world craftsmanship can look distinctly modern—a combo that feels very right for right now. For Kennedy, though, vintage rugs are simply his passion and he’s just looking for new ways for us all to enjoy these old treasures.

‘It’s Like Musical Chairs’: Why Booking a Private Jet Is More Difficult Than Ever This Summer