Oh my gosh: Usher and Rémy Martin have joined forces on a new release at the intersection of fine Cognac, art, music and technology.

The Grammy-winning R&B singer has designed a limited-edition bottle for the house’s 1738 Accord Royal Cognac and a matching NFT artwork that will debut alongside a multi-sensory experience in Las Vegas.

The new-age bottle, entitled “Usher x 1738 A.I. Powered,” was reportedly created using artificial intelligence technology. Essentially, the “OMG” singer came up with a bunch of words to describe his olfactory experience when sipping the aforementioned brandy. (It promises flavors of toasted bread, vanilla and brioche if you’re wondering.) The fancy AI tech then turned Usher’s tasting notes into an artwork that was used for the bottle design and the NFT.

“I’m an artist at my core, so transforming an abstract sensory experience like taste into something visual really spoke to my creative process,” Usher said in a statement. “I leaned into the exemplary Rémy Martin 1738 Accord Royal that flowed through me and am so impressed by the visuals that came out of the A.I. process—they truly represent the medley of tasting notes captured in the flavor.”

The bottle has also been reimagined in black and fitted with a special seal that celebrates the 25th anniversary of Usher’s hit album My Way. Of the 50 that were created, 25 will be sold as NFTs via BlockBar this Friday, July 29. (The remaining 25 are reserved for the singer and his team.) Priced at $500 (or roughly 0.35 Ethereum), each NFT is uniquely marked and can be securely stored on the blockchain, resold on the marketplace or redeemed for the physical bottle in October. 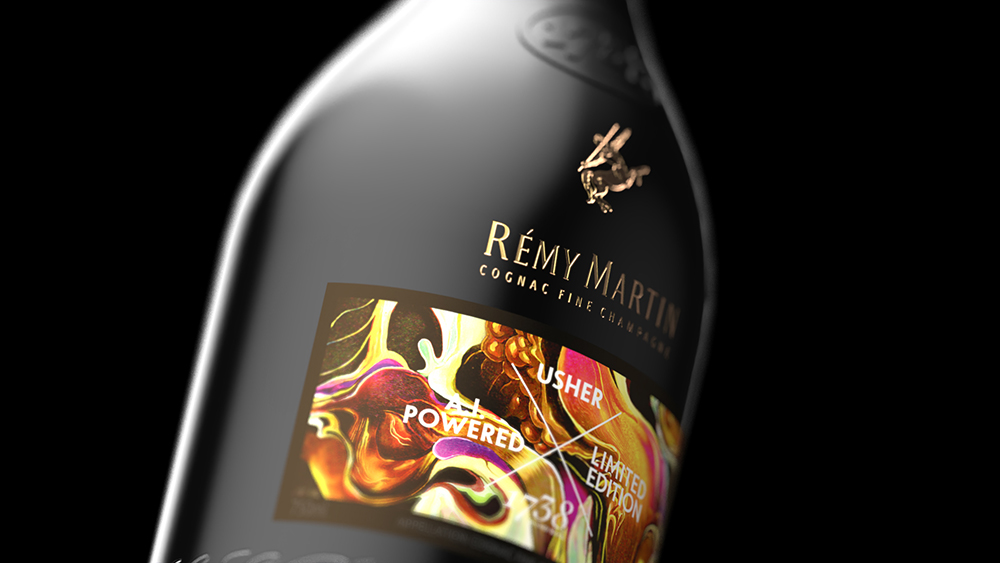 Each bottle sports a special seal honoring the 25th anniversary of “My Way.”

To top it off, the drop is offered alongside a new immersive experience. Running on select nights from July 15 through October 29, A Taste of Passion will feature a range of 1738 Accord Royal cocktails specially curated by Rémy Martin and Usher, along with some tunes in honor of the musician’s illustrious career. The experience also coincides with Usher’s Vegas residency, so you can also see him live on the Strip if you’re not already too Ushered out.

How Shania Twain Crawled Out of Her Painful and Public Divorce

Danny Garcia Says His 11 Toes Give Him Leg Up Against José Benavidez Jr.

Prepared Drinker One? The Murderer’s Creed Bourbon You Didn’t Know You Wanted Is…

Bushmills’ ‘Peaky Blinders’-Impressed Whiskey Needs to Present You How Prohibition…